We’re talking about sensory detail in writing this month on The Write Spot Blog.

Delicious! by Ruth Reichl is rich in sensory detail:

. . . I could taste the cake in my mind. Strong. Earthy. Fragrant. I remembered the nose-prickling aroma of cinnamon when it comes in fragile curls, and the startling power of crushed cloves. I imagined them into the batter.  Aunt Melba was grating the orange rind now, and the clean, friendly smell filled her airy kitchen.

Delicious! is filled with this type of glorious descriptions about smells.  Reichl is a restaurant critic and cookbook author. No wonder she knows about smells!

Delicious! is . . . well. . . delicious with lovable characters, a charming story, delightful scenes and interesting premise. Characters’ stories circle around one another, building upon detail until the end, when it all comes together in a satisfying scene.

“What else will you need?”

I picked up the orange and grated the peel, enjoying the lovely citric scent filling the air. I squashed the ginger, feeling the quiet explosion beneath my knife. I sifted flour, watching the patterns drift onto the wax paper.

I creamed the sugar into the butter, watching two substances become one. I cracked the first egg, mesmerized by the deep marigold color of the yolk.

I buttered the cake pans, dusted them with flour, and filled them with batter. I smoothed the tops and set the pans, very carefully, into the oven. 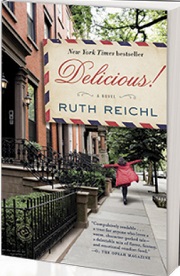 Ruth Reichl is the author of Delicious! a novel published by Random House in May 2014. She was Editor in Chief of Gourmet Magazine from 1999 to 2009.  Before that she was the restaurant critic of  both The New York Times (1993-1999) and the Los Angeles Times (1984-1993), where she was also named food editor. As co-owner of The Swallow Restaurant from 1974 to 1977, she played a part in the culinary revolution that took place in Berkeley, California. In the years that followed, she served as restaurant critic for New West and California magazines.

Ms. Reichl began writing about food in 1972, when she published Mmmmm: A Feastiary. Since then, she has authored the critically acclaimed, best-selling memoirs Tender at the Bone, Comfort Me with Apples, Garlic and Sapphires, and For You Mom, Finally.

Note from Marlene: And I wish she would write more fiction. I love her writing!