Sometimes you read a book and it turns out to be perfect timing. You might not know it when you start the book but then, as you read and your life unfolds, the unexpected becomes a gift. That’s what happened as I read Imperfect Endings by Zoe FitzGerald Carter.

In Imperfect Endings, Zoe  expertly tells the story about her mother’s decision to end her life and the difficult days that follow. Zoe deftly weaves the end-of-life narration with childhood experiences as she and her two sisters navigate this unexpected turn in their lives.

Written with grace and honesty, Zoe captures recognizable emotions about how we get along, or don’t get along with our parents and our siblings. Her eloquent exploration of these primal feelings is like art in its simplicity and transparency.

Zoe says to her sister, “I’m totally losing it, Han. I feel like I’m sleepwalking.”

Zoe’s writing is among the best I have read. Imperfect Endings is on my list of all-time favorite books and is an excellent primer on how to write memoir.

I read the final chapters of Imperfect Endings during my mother-in-law’s last few days on earth. I’m grateful for Zoe’s wisdom and sharing her experience about navigating the tricky waters of helping someone die. My mother-in-law (Margaret, same as Zoe’s mother’s name) didn’t need help dying. The details are different, but the emotions Zoe writes about are universal. 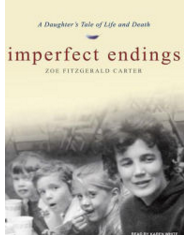 Imperfect Endings won first place in the 2008 Pacific Northwest Writer’s Association’s literary contest and was a finalist at The San Francisco Writer’s Conference. It was excerpted in O magazine and is a Barnes & Noble “Discover Great New Writers” pick for 2010. Paula Span of The New York Times:

“I could quote from this book all day. . . but instead I’ll just recommend that those intrigued by the subject spend a little time with the ailing but ferocious Margaret and her daughters. A decision to die can sound romantic or it can sound repugnant. Carter shows us what it was like in reality.”

With Zoe’s tender care, Imperfect Endings is also a daughter’s love story for her mother.

Zoe FitzGerald Carter was born in France and grew up in Washington D.C. She is a graduate of Columbia Journalism School and has written for numerous publications including The New York Times, The San Francisco Chronicle, Salon and Vogue. Zoe teaches memoir writing at workshops and conferences.