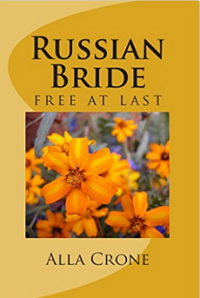 What was it like to be a Russian bride married to a physician in the U.S. Army Air Corps and immigrating to the United States from Shanghai? Nina is thrown into a world of new customs and left to perform hostess duties to her husband’s colleagues. She is surrounded by a mother and mother-in-law, both of whom have caustic and critical personalities. Fortunately, Dick is a delightful and understanding husband. This novel is a mix of humor, joy and sadness.
A fast read!

Jeane Slone is a past vice-president and board member of the Redwood Branch of the California Writer’s Club, a member of the Healdsburg Literary Guild, the Military Writer’s Society of America, and the Pacific Coast Air Museum.

Jeane emcees the Dining With Local Authors program and distributes local authors’ books throughout Sonoma County. She has published three historical works of fictions: She Flew Bombers, winner of the national 2012 Indie Book Award; She Built Ships During WW II, and She Was an American Spy During WW II. These novels feature women taking men’s roles who experience gender and ethnic discrimination.

Russian Bride, Free At Last by Alla Crone is a roman à clef. In this fiction based on fact novel, Nina was born into a wealthy family in the Russian community in Harbin, Manchuria. Nina’s mother married a scoundrel. When her parents lost everything, Nina experienced deprivation, humiliation and discovered an inner strength that led her to a new world with Colonel Richard Allan, a physician for the U.S. Army Air Corps. This is a love story that leads the handsome couple from China to a fascinating lifestyle in the United States.

This is also a story rich in detail about what it’s like to traverse the rocky terrain from the known of a unique community to strange new world. Nina quickly learns new customs and traditions (including how to use a knife and fork, American style). As the wife of a military officer Nina was expected to entertain diplomats, which showcased her many talents and skills. Although her assimilation into this new way of life was often difficult, Nina persevered and overcame many difficult obstacles. Her intelligence and varied talents allowed her to excel and become accomplished in many areas.

It’s also a story of the fragility and complex nature of human beings. Nina maneuvers the tricky challenges of pleasing her demanding mother and haughty mother-in-law.

I thoroughly enjoyed this adventure into a world foreign to me. Alla Crone eloquently writes in a style that is engaging and transports the reader to a myriad of situations, places and important historical events. An engaging travelogue, attentive of the complexities of relationships and details of the era result in a satisfying story. All in a day’s work for our courageous heroine.