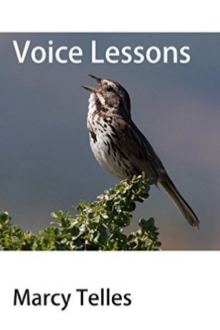 The set-up of Voice Lessons by Marcy Telles:

“Sor-ree,” said an unfamiliar voice behind her.

[Phoebe] was used to being made the butt of jokes, but this seemed a bit literal, even for her somewhat crudely oriented classmates.

A hand dangled suddenly in front of her face, and looking up, Phoebe found it attached to a person she’d never seen before. Having spent her entire life in this neighborhood and knowing pretty much everyone in her class, a new face was enough of a novelty to capture her fractured attention. . . .

It was not easy to be a small, unorthodontured, bookish sort of person (who had not had a nose job) in a big New York junior high school where everyone was in a permanent state of competition.

Right away, I am liking this narrator and intrigued by the writing style. Unorthodontured? I think I’m in for an entertaining read.

Voice Lessons intrigues, entertains, and offers characters so lovable and situations so frustrating that readers are offered the opportunity to experience a range of emotions, courtesy of Marcy’s deft writing. The main character’s low points are heartbreaking and so unfair! Yet, she perseveres and not only survives but thrives as she travels with her daughter through treacherous territory. The main character, unsure of her footing at times, but always putting one foot forward, Voice Lessons contains lessons for us all. You just have to read it for yourself to discover what Voice Lessons holds for you.

Personal note from Marlene: Voice Lessons by Marcy Telles holds a special place in my heart. Her journey ended far too soon. A philosopher might say she learned her lessons here on earth and was ready to move on. Marcy passed away in the loving embrace of her family on November 19, 2015.

I had the pleasure of writing with Marcy at Jumpstart in Petaluma, CA. After I finished reading her book, I sat for a few moments, quietly contemplating Remarkable Marcy and feeling incredibly sad that she is no longer with us to write new material. She is definitely here in spirit. I’m so glad she was able to finish writing her book and see it to publication. Another “Ah, she did it” feather in her cap.

Marcy, I’m raising my bookmark to you. Your kindness, tenderness and grace remind me to be kind. I picture you with your quiet smile lighting up the room. I see listeners leaning in to hear what you have to say or sing. You inspire me to stay steadfast to my goals even when, especially when, obstacles dot the path. ~Marlene

Unsure which of the arts to pursue, Marcy tried an acting career: as the dead body in Arsenic and Old Lace. Despite the talent evident in this role, she did not re-enter the theatrical world until 1981, when she co-wrote and toured with Morning Glory Theatre’s production of Three Golden Hairs, a musical fairy tale for elementary school children.

Marcy won several national awards for songwriting, and was a finalist in the Spring Lyric contest on A Prairie Home Companion. Combining theater and music, she wrote her first libretto in 1973 for an incipient puppet group named Das Puppenspiel, which won international awards.

Marcy performed as a singer-songwriter for many well known singers, written libretti for children’s operas, as well as lyrics and often the melody for over 100 songs. Her work has been performed throughout Sonoma County.