The thrill of publishing one’s first book is joyful, a dream come true, right? Oh, the anticipation of getting my children’s picture book into print and out there in the marketplace! I attended lectures, workshops, and conferences to acquire the information I needed to become an indie publisher. I’d heard horror stories from authors who’d been scammed by vanity presses, paid too much for a web design, or didn’t know an ISBN from the BOE or a DBA, POD or LCCN. That would not be me.

I bought a block of ten ISBN numbers. After all, if one costs $125, ten at $250 is more than a bargain. I set up my own Butterfly Books imprint and obtained a resale license from the state Franchise Tax Board. I was now a sole proprietor ready to do business and offer the world my first children’s gardening book, Mrs. Feeny and the Grubby Garden Gang. This of course was after I’d hired an illustrator and book designer whose charges will remain undisclosed.

Late in the game, I discovered Butterfly Books already existed. Actually, that imprint became official the very same week mine did. What are the chances? (It takes a lot of sleuthing on the Internet.) That owner was a lawyer; therefore, I wisely decided to avoid an infringement or conflict of interest lawsuit by quickly choosing another imprint name: Black Garnet Press, of which there are no duplicates!

My book was to be a typical children’s picture book: full color, 32 pages, 8” x 10”, and hardbound. I priced it at $15.95, in the mid-range of this genre. I found a company here in the U.S. that would print them, one, ten or 100 at a time. This is called Print On Demand (POD), and the company I chose after much research and advice was Lightning Source International (LSI), an arm of the huge Ingram distribution company.

Say I consign the book, an agreement that is typically 50-50: the shop nets $8 on a $16 sale and so do I. That means I receive $8 for a book that costs $9 to print and forget the royalty. How’s that for a business model?

I decided not to purchase 2000 books from a printing company in Korea or China—I know authors with 1800 of them still in their garage. It really is less expensive to print overseas, but who needs that many books?

Granted, children’s full color, hardbound picture books are among the most expensive to produce. Turns out that LSI doesn’t offer dust jackets nor does it print the title and author on the spine. Arrrgh! Are there lessons to be learned here? 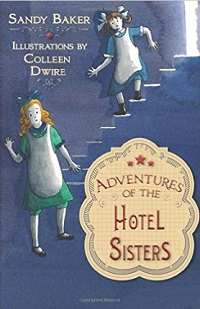 Note from Marlene: It seems Sandy did learn a thing or two about publishing. Since Mrs. Feeny and the Grubby Garden Gang was published, Sandy has produced and published eight books.

SANDY BAKER’S passions are gardening, writing, reading, and traveling. Sandy recently published Adventures of the Hotel Sisters, fictionalized 1920s short stories about her maternal grandmother and her eight children. Sandy’s interest in this era harkens back to 9th grade when she wrote an extensive term paper on 1920s’ clothing, dances, Prohibition, gangsters, Stock Market Crash, and Women’s Suffrage. In between writing and reading, her major gardening project entails removing her front lawn and replacing it with mulch and 24 Provence lavender plants. Sandy is a Sonoma County Master Gardener and president of Redwood Writers, the largest branch of the California Writers Club.