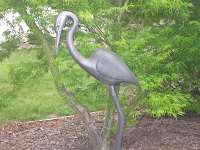 Haiku is one of the most important forms of traditional Japanese poetry. Haiku is  a 17-syllable verse form consisting of three metrical units of 5, 7, and 5 syllables. —  Haiku for People

“Haiku (俳句 high-koo) are short poems that use sensory language to capture a feeling or image. They are often inspired by an element of nature, a moment of beauty, or another poignant experience. Haiku poetry was originally developed by Japanese poets, and the form was adopted (and adapted) by virtually every modern language, including our own. The secret to writing great haiku is to be observant and appreciate nature.” — Wikihow-Write-a-Poem

Penelope La Montagne is a poet laureate emerita of Healdsburg. She is the author of River Shoes by Running Wolf Press and Jigsaw Heart by Finishing Line Press. Once upon a time, she hosted a radio spot each weekday morning for 6 years on KRCB Radio called Morning Haiku.