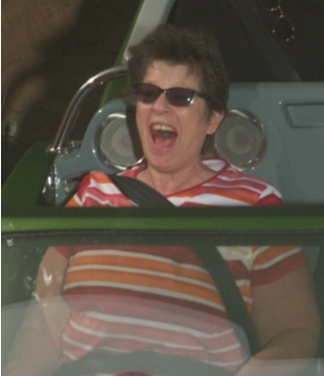 Note from Marlene: Guest Blogger Susan Hagen encourages us to have fun. And shows us how we can heal through writing . . . one of my strong beliefs, also.

To celebrate our 62nd birthdays, my best friend and I recently spent the weekend in Disneyland. Despite creaky knees and stiff backs, we were ready to party like … well, like eight-year-olds.

We had great fun on the (not-too-wild) rides and enjoyed being playful and somewhat silly. But in that space of awareness about our childhoods, what arose in both of us were memories of disappointing birthdays of the past.

It’s never too late to have that birthday cupcake.

For me, it was 1963, the year I turned eight. My mother was supposed to bring chocolate cupcakes to my third-grade class at the end of the school day.

But a few days before my birthday, President John F. Kennedy was shot. Guess what day his funeral was? That’s right. My birthday. No school, no cupcakes, no party. I was too young to understand why everything shut down that day. All I knew was that my birthday was ruined, and I was devastated.

Disneyland was my cupcake.

So at age 62, I made Disneyland my cupcake. I screamed like an eight-year-old on the roller coaster. I ate the ears off more than one Mickey Mouse confection. I even climbed aboard a few kiddie rides with my BFF, who found a way to heal her own birthday traumas, too.

When the weekend was over, we declared it all complete. We’d both had the best birthday EVER in the Happiest Place on Earth.

You can heal that stuff through writing, too.

Sometimes it takes putting your story down on paper to see how you can heal things from the past. Writing helps us bring ourselves current. We write a story about some part of our lives, and then we see how we’ve grown—not only since that time, but maybe even because of it. Writing helps us illuminate the dark places. It helps us bloom into greater self-awareness and self-acceptance. And it helps us make sense of our lives: how we got to here from there.

So go ahead. Have that birthday cupcake, even if it is 54 years old!

Susan Hagen’s writing career began in the 1970s as a newspaper reporter in Northern California. She later served as editor of employee publications. She has since worked as a freelance writer for more than 100 corporations and nonprofit agencies across the country.

In 1994, Susan became a firefighter and emergency medical technician in rural Sonoma County, California, where half the members of her firehouse were women. Following the September 11, 2001 terrorist attacks on the World Trade Center, she and her colleagues were acutely aware of the absence of women in media portrayals of rescue workers at Ground Zero.

Susan combined her knowledge of the fire service with her experience as a writer to conceive of the idea for the book, Women at Ground Zero: Stories of Courage and Compassion, with co-author, Mary Carouba.  She and Mary traveled to New York City to find and interview female first responders for their award-winning book, which was published by Penguin Putnam in 2002.

Since the publication of Women at Ground Zero, Susan has seen firsthand the power of sharing one’s story. Many of the women featured in her book believe that telling their stories was the first step in healing from the tragedy of 9/11. Susan draws on these experiences, along with those from her own life-changing journey, to help others give voice to the stories of their lives.

Note from Marlene: Women at Ground Zero is one of my favorite books. A fascinating story of remarkable courage . . . the courage that took Hagen and Carouba from their comfortable home in Northern California to New York City to learn more about the first responders for the attack on New York City. They interviewed 30 women whose stories are told in detail in this riveting book that reads like a novel.