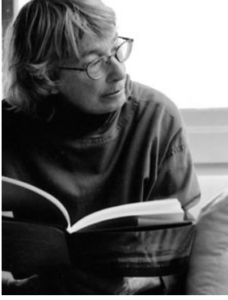 Poet Mary Oliver was born in 1935 in Maple Heights, Ohio. She had an unhappy childhood and spent most of her time outside, wandering around the woods, reading and writing poems.

From the time she was young, she knew that writers didn’t make very much money, so she sat down and made a list of all the things in life she would never be able to have — a nice car, fancy clothes, and eating out at expensive restaurants. But Mary decided she wanted to be a poet anyway.

Mary tried college, but dropped out. She made a pilgrimage to visit Edna St. Vincent Millay’s 800-acre estate in Austerlitz, New York. The poet had been dead for several years, but Millay’s sister Norma lived there. Mary and Norma hit it off, and Mary lived there for years, helping out on the estate, keeping Norma company, and working on her own writing.

Mary said: “I was very careful never to take an interesting job. I took lots of jobs. But if you have an interesting job you get interested in it. I also began in those years to keep early hours. … If anybody has a job and starts at 9, there’s no reason why they can’t get up at 4:30 or 5 and write for a couple of hours, and give their employers their second-best effort of the day — which is what I did.”

She published five books of poetry, and still almost no one had heard of her. She doesn’t remember ever having given a reading before 1984, which is the year that she was doing dishes one evening when the phone rang and it was someone calling to tell her that her most recent book, American Primitive (1983), had won the Pulitzer Prize. Suddenly, she was famous. She didn’t really like the fame — she didn’t give many interviews, didn’t want to be in the news.