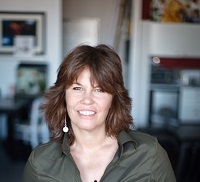 Guest Blogger Leslie Larson gives us the scoop on where stories come from.

Writers on reading tours can be pretty sure that as soon as it’s time for Q & A, someone’s going to ask them where they got the story. That’s the word that’s usually used, got, as if the author might have picked up the story in the maternity ward at San Francisco General Hospital, or found it in the frozen food aisle at Safeway. The question might be offhand, as in, “Where’d you find those chenille throw pillows? or it may be asked with the earnestness and urgency of a child questioning the existence of God. It’s often followed by a swarm of spinoff questions. Did the story come to you all of a sudden? Did you just start writing and see what happened? Did you start with an outline? Did this happen to you?

Some writers give sly responses to the inevitable question of where they get their ideas.

“I steal them from girls,” Dorothy Allison quipped at a reading I attended. Robin Hemley, who wrote Turning Life Into Fiction answered, “Joyce Carol Oates gives me her extras.”

No matter how many times I’m asked this question (and it ranks right up there with “How did you decide to become a writer?” and “What is your writing routine?”), I still don’t know the answer. I suspect that most writers spend a fair amount of time wondering where their stories come from, though they probably spend more time worrying about where their stories are going.

“Where a story begins in the mind I am not sure,” Annie Proulx said in an interview in The Missouri Review. “A memory of haystacks, maybe, or wheel ruts in the ruined stone, the ironies that fall out of the friction between past and present, some casual phrase overheard. But something kicks in, some powerful juxtaposition, and the whole book shapes itself up in the mind.”

Personally, I don’t care so much where stories comes from, as long as they come. One of the most exciting times for me is the state of fidgety nervousness, or perhaps excitement, that signals something’s out there, something’s taking shape. I begin to hear whispers. I catch glimpses of shapes I can’t quite make out. Characters materialize in bits and pieces, beginning perhaps with only a bitten-down thumbnail, a lisp, or a weakness for salty foods. It might be a scene: an old kitchen or a vacant lot, a place where something happened or is about to happen. As these tantalizing fragments begin to surface, I start looking everywhere for the story: in dreams, in the newspaper, on the bus. The next bit of conversation I overhear or the discolored scrap of notebook paper I find on the sidewalk may be exactly what I need to launch my story. There’s no telling where it might crop up.

In the interview mentioned above, Proulx said her character Loyal Blood, from Postcards, leaped complete and wholly formed from a 1930s Vermont state prison mug shot. And there’s the famous case of Thomas Hardy who, while pruning his fruit trees, conceived from start to finish the plot of the greatest novel he would ever write. Unfortunately, he forgot it by the time he finished the job, so he pocketed his shears and went inside for dinner.

Certain activities are conducive to finding stories. For me it’s walking, weeding, popcorn eating, and personal hygiene—particularly nail clipping and eyebrow tweezing. And reading, that’s a big one. When I’m looking for my story, I sense the presence of untold or abandoned stories in other writers’ books. The roads not taken, the bones and corpses that fertilized that novel, the shoots nipped off before they could bloom. Something might get knocked loose in my head. A cast-off stalk that didn’t find the right soil in one writer’s story might take root in mine and surprise me with a magnificent blossom.

I’ve found that you can’t force a story to come; you can’t get one—like a new car—just because you want it. But you have to be ready for it: waiting, watching, listening. In this condition, you’re likely to get too many ideas, because everything takes on meaning. You realize how ripe our everyday lives are with intrigue, insanity, loopy characters, hilarity, irony, and twists of fate. We’re surrounded by stories, our own and other people’s. Family secrets, childhood traumas, persistent fantasies. All fair game.

Do we find the story, or does it find us? Is it already inside us, just waiting to be told? Why do we write about some things rather than others? More than once, I’ve started what I thought was my novel, armed with notes, character sketches, rudimentary scenes, outlines, only to find myself—after ten, or fifty, or two hundred pages—putting it aside so I can crank out what I think will be a short piece, a piece that turns out to be the novel itself—the real story, or at least the story that gets told. The original becomes yet one more stack of aging papers, another dead-end reproaching me from the shelf in my closet.

Someone else’s story, perhaps, waiting to be found.

Leslie Larson’s critically acclaimed first novel, Slipstream, was a BookSense Notable Book, a Target Breakout Book, winner of the Astraea Award for Fiction, and a finalist for the Lambda Literary Award. Her second novel, Breaking Out of Bedlam was an AARP Hot Pick and a finalist for France’s Chronos Prize in Literature, awarded by the National Foundation of Gerontology. The New York Times called Breaking Out of Bedlam, “A kick.” Publishers Weekly said, “Delightful…Plenty of heart and humor.” And the Boston Globe called it, “A funny, touching novel.”

Leslie’s work has appeared in O (The Oprah Magazine), Faultline, the East Bay Express, More magazine, Writer magazine, and the Women’s Review of Books, among other publications. She is an editor at North Atlantic Books and a former senior writer at the University of California Press.

Leslie has taught creative writing workshops across the country, was a writer-in-residence at Hedgebrook, and has been a member of the Macondo Writer’s Workshop since 1995. She was born in San Diego and lives in the Berkeley.