Reliable narrator – a narrator whose account and perceptions we can trust

Unreliable narrator – a narrator whose own ignorance, mental or emotional state, age, prejudice, etc. may distort or limit his or her perceptions

Free indirect style – a lesser know POV, a style of third-person narration, using some of the characteristics of third-person along with the essence of first-person direct speech. We will explore this style in a future blog post.

POV can be any of the following in fiction and non-fiction:

First person narrator: Narrator is a character in the story and narrates the story using the pronoun “I.”

The third person narrator can be omniscient or limited.

The omniscient third person narrator is all-knowing, able to move in and out of the thoughts of all the characters and to comment on events before and after the scene has happened.

The limited third person narrator is limited to knowledge about a single character, or one character at a time.

~Zoom in: Close, as if beside the character

~Zoom out: Objective and distant, observing in a general way, like a fly on the wall

Really close: Inside the character’s consciousness and skin: can describe sensations, perceptions, inner workings, and responses of the character.

Edward Tollivar leaned into the wind. The cold sliced through his coat as he walked through the snow to Tracy Covey’s house on Jane Street. Camera moves closer. Narrator is striding alongside Edward and tells us where he is going. 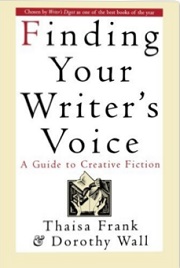 Selections from Finding Your Writer’s Voice: A Guide to Creative Fiction, by Thaisa Frank and Dorothy Wall, inspired this post.

Explore more about point of view in past posts: