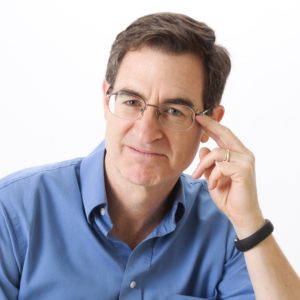 Note from Marlene: I have been helped and inspired by Brad Yates and his Tapping Videos. I hope you enjoy reading about his New Year’s Eve experience in Paris.

From time to time we hear stories – or see videos – of differently-abled people doing remarkable things.  We may find these stories to be inspiring… and sometimes we might even find them challenging, as we confront how we may have allowed lesser hurdles than theirs to limit our lives.  We can allow ourselves to be shamed by these, or let them serve as wake-up calls to stop making excuses.  Naturally, I’d guide folks towards the second option.

Most of the time, these stories come into our awareness in a fleeting way, and not a personal one.  More often, it’s someone we don’t know and will likely never meet, making it less likely to stick.

Our 2017 ended with an up-close-and-personal encounter. 🙂

My family and I spent the holidays in Europe, where I did workshops in London, Dublin, Prague and Paris.  It was a fantastic trip, filled with wonderful experiences, many of which involved meeting fantastic people.  This is one of them…

We had chosen to be in Paris on New Year’s Eve, and decided to check out the Main Attraction – the celebration on the Champs-Élysées. We had taken a boat tour along the Seine, and returned to the Eiffel Tower just after sunset, arriving just in time for the spectacular hourly light show.  From there we walked up to the Arc de Triomphe.  It was still early, and people were just starting to gather. The roads were starting to close, and there were heavily armed and armored police – which was both intimidating and reassuring. The Arc was lit up with test patterns for the light show that would take place just before midnight.

It looked like it was going to be quite an event … but it also looked like it would be very crowded … and it was raining … and we all agreed that we’d rather head home and watch it on TV while sipping champagne, which we wouldn’t be able to do there.

So we headed down into the nearest metro station, which was packed. We noticed a woman holding the arm of a blind gentleman in his late-twenties, who made his way past us up to the glass doors at the edge of the platform as his guide disappeared, apparently having only been there to help him get to this point.

My French isn’t great, but I could tell he was asking for some assistance. I don’t recall which of us explained that we didn’t understand, but he quickly responded in English. (We would later discover that he spoke five or six languages fluently!).  He explained that the glass doors in this station made him nervous, and was hoping for some assistance when the train arrived and they opened. The crowd in the station would make lots of folks nervous, even if they could see everything going on.

It wasn’t long before a train came … and passed us by. Then another… and another. Then there was an announcement on the loudspeaker, and people started leaving the platform. Our new friend explained that this line was being closed at this station. He asked where we were going, and when we told him, he suggested a different line that also stopped at this station, and where to take that to get to another line to get to our desired destination. Even though he had never seen a metro map, he knew the different lines, where they stopped and where they connected. The alternate line he suggested would also take him in the right direction, so he latched onto Christy’s arm and suggested we head to that platform.

Not long after we got there, there was another announcement, and people again started leaving. The whole station was being shut down. Our new friend said there was another station further down the road – at the Place de la Concorde, where we could find a train we needed. Although he was on my wife’s arm, he was the guide to the clueless tourists. A very different take on “the blind leading the blind.”

As we walked along the Champs-Élysées, we learned that our new friend was named Hossein, and was from Iran. He was very friendly and charming and asked a little about each of us. When we said we were from California, he mentioned he hoped to go there someday and we’d find him swimming in the rivers. He said he loved to swim – “faster than a fish” – and had competed in tournaments.

I was impressed. Far from feeling limited by his lack of sight, here was a young man who had studied engineering, was traveling the world, learning languages, getting to know people, doing things that could intimidate lots of sighted people (like going into crowded metro stations), figuring out complicated metro map… and apparently really living a full life.

He also wasn’t afraid to ask for help – something so many of us struggle with. Obviously, it was something of a necessity, which may be why he had learned to do it so matter-of-factly and pleasantly.

Eventually we arrived at the next station, and he insisted we leave him at a certain spot, as we would be going on different trains. He warmly shook hands with my son and me, and kissed my wife and daughter’s hands. Then began gently saying, “Excusez-moi…,” looking for the next person who could help navigate the way to the platform. We felt comfortable leaving when a Metro staff member came to assist him.

It was a really lovely way to put 2017 to bed, and we were all touched by the experience.  It is my intention that his example of not making excuses will continue to inspire me in this New Year.  I hope it might do the same for you as well. You deserve a great life.

Note from Marlene: Are you waiting to write? What’s holding you back? If you can envision it, you can do it, especially with inspiration from Tapping with Brad Yates.

Brad Yates is known internationally for his creative and often humorous use of Emotional Freedom Techniques (EFT). Brad is the author of the best-selling children’s book “The Wizard’s Wish,” the co-author of the best-seller “Freedom at Your Fingertips,” and a featured expert in the film “The Tapping Solution,” He has also been a presenter at a number of events, including Jack Canfield’s Breakthrough to Success, has done teleseminars with “The Secret” stars Bob Doyle and Dr. Joe Vitale, and has been heard internationally on a number of internet radio talk shows.  Brad also has well over 700 videos on YouTube that have been viewed over 19 million times, and is a contributing expert on the Huffington Post.