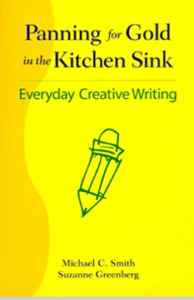 Today’s writing prompt is excerpted from Everyday Creative Writing, Panning For Gold in the Kitchen Sink by Michael C. Smith and Suzanne Greenberg.

Ben Johnson, a seventeenth-century English writer and scholar, characterized poetry as “What has been oft thought but ne’r so well expressed.” In so saying, Johnson relieves poets of the obligation of coming up with new ideas and focuses on the perhaps infinite number of ways that ideas can be expressed.

To illustrate this idea, consider that most of us were required to write a “What I Did This Summer” essay at some point in our school careers. While the subject matter for these essays is largely the same among classmates – camp, swimming pools, summer jobs – the ways in which we wrote our stories those details we chose to highlight and those we chose to omit, are what gave each piece its own flavor and originality.

For example, the following were written by two sixth-graders.

1. I went away to camp this summer, which was interesting. I had never been to camp before and I enjoyed meeting new people. I slept in a bunkhouse with five other girls. I went sailing and learned how to macramé, which really is more boring than it might sound. I made a new friend who was very nice. We did a lot of activities together, which made everything a little more interesting than it was before. It’s important to have a good friend at camp.

2. Has anyone ever tried to convince you that tying knots is fun? How about sitting on a stagnant pond waiting for a gust of wind that never comes? Well I spent the summer waiting to be convinced that either of these activities were fun. At least I made a friend, Bobbie. Finally, we got smart and started hiding behind the bunk and reading her sister’s old issues of Seventeen when it was time for knot-tying class – whoops, I mean macramé.

For another prompt about vacation writing, please click on The Real Summer Vacation.