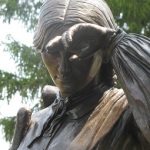 For this prompt, you can write about “shame” as a topic in general.

Or: Write on  something you are feeling shameful about. You can fictionalize your personal situation to write about a difficult subject.

Or: You can write about shame as character development . . . a character feature to be overcome.