If you could live one day without consequences, what would you (or your fictional character) do? 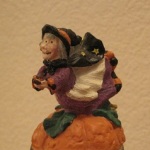