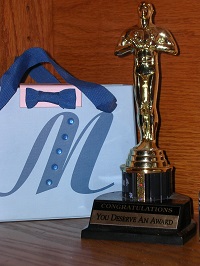 You can write on this prompt from your point of view or from someone else’s point of view. You can also write as your fictional character would respond.

Write about an award you have received. Perhaps a certificate, a leather/letter jacket in high school, lapel pins, crowns, diplomas, trophies.

Is there an award you didn’t receive and thought you should have?  Did your fictional character deserve an award and didn’t get it?  How did he/she respond?