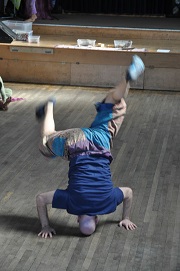 Great art is about balance. Okay, great art is about a heck of a lot of things. But one thing that makes great writing stand out from the superfluity of all writing is that it strikes a balance between emotional abstraction and concrete specificity.

We want to read about things like devotion, honor and transformation. But the actual words devotion, honor and transformation aren’t concrete enough to sweep a reader away. As I discussed in “How to Make Your Poems Stand Out: Advice From a Reader” for Writer’s Digest online,  abstract nouns can’t be grabbed, and they don’t grab readers. And what’s worse, they tend to come in flocks. Once a writer writes honor, then love and respect want to come in. Then deep, forever, and mutual are at the door, having chased away all the beautiful specifics like moonstone, cardamom, and foxtrot.

But luckily, concrete nouns also come in flocks. That’s because when you tell a story or describe a moment, either remembered or imagined, the telling includes all the specific things that make the moment unique and moving. If you want to test whether your writing is too abstract, imagine illustrating it. Could you? If there aren’t enough nouns and verbs to make into a drawing or painting, then your writing may be too abstract to interest most readers.

Allen Ginsberg put it well: “You can’t write about ‘The Stars.’ You can go out one night and see a glitter in Orion’s belt, or see a constellation hanging over Nebraska, and that’s universal. But it’s got to be over Nebraska—particular—otherwise it isn’t universal. If it’s just the stars in the abstract you don’t even see them, so it’s not a living experience. It’s not an instant in time actually observed, and only instants in time are universal.”

What’s universal is the sense of being human that we translate into language as writers and that readers translate back into thought. That’s why concrete sense imagery is so crucial. That’s how the abstract system of language is able to relate living humans to one another—though memory and imagination of sensed experience.

Here are two poems that I think do a good job of being relatable by being specific. The first is one of my own, a draft in a series about a legendary backwoods character named Starlight. The second is by Rebecca Auerbach, and I think it’s wonderful how her imagery isn’t just visual, but also auditory, and even more interesting how the sensation she describes is often the absence of sensation and hunger for it.

“To build a supper”

We used to start with eyes meeting,

Now we start with a photograph & a profile.

when he isn’t smiling at you,

the way he introduces himself

when he isn’t meeting you,

& if you like what he says when you can’t hear him,

when he has never seen you,

consent to look into his eyes.

Daniel Ari began dancing to Freeze Frame” by The J. Geils Band at an 8th grade dance in 1981. He hasn’t stopped. About five years later, he began courting poetry as a practice, and that, too has stuck. As a poet and professional writer these days, movement remains key to his creativity.  Daniel recently won Grand Prize in the Dancing Poetry Festival, and his poem about swing will be set to choreography and performed at the Legion of Honor in September. His forthcoming book One Way To Ask from Zoetic Press, pairs poems in an original form called queron, with artwork by 67 artists including Roz Chast, Tony Millionaire, Bill Griffith and R. Crumb.

Daniel Ari will be the August 20, 2015 Writers Forum Presenter in Petaluma, CA