Do you like success stories?  The kind where the humble, modest guy brings all kinds of people together in a unique way with amazing results?

Meet Brandon Stanton, photographer and creator of the Humans Of New York project. I love his story.  Even though I have never met him, I feel like I know him.  Here’s his story.

Brandon Stanton worked as a bond trader until he lost his job in July 2010. He started taking photos of buildings in Chicago. Then he spent a week in Philadelphia, taking photos of bridges, and occasionally photos of people. He headed for New York, intending to stay for only one week. This time, he took photos of people on the streets and began asking them questions. He posted these photos and quotes on Facebook. The response was tremendous, lots of “likes.”  I mean LOTS of likes.  To date, he has over three million followers.  But I’m getting ahead of the story.  New York worked so well with this adventure, Brandon decided to stay in New York. Well, first he went home to pack and explain to Mom, who was a bit upset, but I’m sure she is a supportive Mom and sent him off with a hug and maybe a lunch.

Here’s Brandon’s story, in his words:

My name is Brandon and I began Humans of New York in the summer of 2010. I thought it would be really cool to create an exhaustive catalogue of New York City’s inhabitants, so I set out to photograph 10,000 New Yorkers and plot their photos on a map. I worked for several months with this goal in mind, but somewhere along the way, HONY began to take on a much different character. I started collecting quotes and short stories from the people I met, and began including these snippets alongside the photographs. Taken together, these portraits and captions became the subject of a vibrant blog.  HONY now provides a worldwide audience with daily glimpses into the lives of strangers in New York City.  It’s been quite a ride so far. Feel free to follow along [Facebook].

“The evolution of Humans of New York is really about getting more engaged with my subjects.” 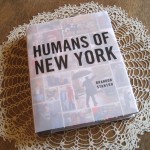 Brandon’s book, Humans of New York, sold 30,000 pre-publication copies. One of those books sits on a little table in my writing room.

Even though these photos and quotes take place 2,900 miles from where I live in Northern California, I love and relate to the human interest stories.  “. . . a beautiful, heartfelt, funny, and inspiring collection of photographs and stories capturing the spirit of a city.”  Amazon

I especially love Brandon’s attitude.  He says you never know what a person’s story is, until you talk to them. You don’t know if a person is hurting, has an illness, or maybe wants to share good news, until you talk to them. He’s looking for a story, more than a particular photo. He wonders about people and their stories. He believes in a culture of positivity, celebration and the support these  people share. He believes in people.

How refreshing. I bet his mother is very proud.

You can read more about Brandon Stanton at:

Getting to know Brandon.

Ted Talk:  Brandon explains the media phenomenon of focusing on a small piece of the picture, rather than a variety of people and why he felt safe walking New York City streets.

Behind the scenes with Brandon.

More behind the scenes. . . getting to know Brandon. The more videos I see of him, the more I like him.