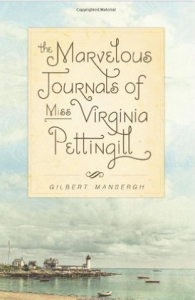 I expected to be charmed by the outgoing and adventurous Ginny Pettingill, a 7th grader who uses her journals to capture her own personal discoveries as well as portray life in Gloucester, MA, shortly after WWI. The fact that the narrator is fashioned after the author’s mother added extra piquancy to the read—did the real Virginia have the gift of sight? Was she really a witness to the dawn of the “talkies” and could she have organized one of the first beach cleanups? I loved how the delights of the past were brought to life, but I was also struck by the shadow side of this lull between wars. It was indeed a time of tremendous excitement and progress—automobiles and motion pictures, Prohibition and Women’s Rights. There were new inventions, like Kotex and electric Christmas lights. But the people of this seemingly simpler time were still recovering from the losses of a terrible war and even more terrible flu epidemic. There was prejudice of many stripes, and bullies, and violence. Virginia, her family, and friends didn’t dwell on the tragedies of the past, but they didn’t forget them, either. The more I read, the more I came to understand why Ginny was said to be part of The Greatest Generation. I thank Gil Mansergh for letting his mother tell her story in novel form so that even greater light can be directed to this time in history.

Susan Bono, author of  What Have We Here: Essays about Keeping House and Finding Home, has facilitated writers of all skill levels for more than 25 years. She edited and published Tiny Lights: A Journal of Personal Narrative from 1995 to 2015. Susan has presented workshops at Point Reyes National Seashore, Idyllwild’s Spirit Mountain, and Istanbul, Turkey. You can take a writing workshop with Susan at Emandal in 2016 and at Jumpstart.

A year with Miss Virginia Pettingill in the early 1920’s is richly layered with historical details that paint a setting for us to watch this amazing seventh grader learn to walk her own fine line between her prophetic abilities and growing up in a quickly changing world for women.  Guided by the “rules” of the boys who teach her to box, pal around and have fun, Virginia learns the rules for life . . . keep the gang’s secrets; never lie to the gang; and most important of all—be useful and earn your place through blood, sweat and tears.”

Teri Sloat came into the world of books through teaching bilingual children in small villages in the Alaskan bush. She was part of a team of teachers, writers, translators and an illustrator (Teri) that formed the first Bilingual Center in Alaska. The team created and printed over 250 books including folklore, Yup’ik basal readers, dictionaries, etc. This experience taught Teri that she wanted to write and illustrate quality picture books for children on a commercial level, which she still does today. Her 25th book will come out this year, and another book next year. Teri’s fine art is often a trigger for a story, and her writing often begins with images instead of words. As a mother and grandmother, speaker and writer Teri has a penchant for word smithing and storytelling, and of course she reads voraciously.

Gilbert Mansergh has written over sixty nonfiction books or curriculums.  The Marvelous Journals of Miss Virginia Pettingill is based on stories Gil’s mother told about being raised as an only child to a suffragette mother (who raised Virginia to be “ladylike”), and a doctor father (who taught his daughter to fish, hunt, and smoke cigars), in America’s busiest fishing port, Gloucester, Massachusetts, 1921-22. A prolific writer-for-hire, Gil was honored as a Freelance Success by Writer’s Digest Magazine.  Gil writes two syndicated movie columns: Screenings, in the Sonoma West newspaper group, and Cinema Toast  in the Press Democrat/Argus Courier, and as a Petaluma360 blog.