Guest Blogger Jane Merryman writes about the silence of the L’s:

I attended junior high and high school at a Catholic school for girls in Menlo Park, California. The nuns were Americans, but the religious order was French and operated schools around the world. All students, from kindergarten through twelfth grade, attended a French class every single day. By the time I graduated from high school I had advanced even into the dense forest of subjunctives. (That was when I learned English also has subjunctives, but we just ignore them.) In college I decided to branch out and signed up for Spanish. What a joy, what a relief, what an ace of a class! Every letter is pronounced. Yes, you have to get used to the fact that the j sounds like h, but you can depend on it—when you look at a word you know how to pronounce it. Much later, when I planned to travel in Italy and took evening school conversation classes, I found that Italian was much the same as Spanish. Of course there is the c gotcha— sometimes it sounds like ch, and sometimes has the hard c, or k, sound, but otherwise Italian has none of the silent letter pitfalls of French or English. Learning Indonesian also proved to be a similarly giddy pleasure. It has the same c/ch effect and, for that reason and its musical quality, is called the Italian of Asia. When I have to use a phrase I find in my handy little Indonesian Berlitz manual, I am confident I can pronounce the whole thing correctly and be understood.

I commiserate with students of the French language. They have to learn to add silent letters to the end of many words, especially verbs. The only consonants that are pronounced at the end of French words are c, r, f, and l, the consonants in the English word careful. What a great mnemonic. I learned this lesson in one sitting. So we have avec with a final hard c sound; gentil and hôtel; pour and jour; and chef. However, tu parles (you speak) and ils parlent (they speak) are pronounced the same as je parle (I speak). Aaargh!

As much as I feel sorry for French schoolchildren, I pity all those newcomers in English as a Second Language (ESL) classes. As if they didn’t have enough problems, they have to contend with the inconsistencies that crowd into speaking English. For every rule of grammar there are exceptions. English seems to be nothing if not exceptions, and silent letters are typical atypicalities.

We have that pesky combination of gh. Sometimes it’s silent on the end of a word as in though. And silent in the middle of a word: blight, slight, ought. It can change the vowel sound as in bough and thought. Then it assumes a sound quite unlike its spelling, as in rough, tough, cough, trough (which can be pronounced with a final f or a th).

There’s the curse of the final e. It’s supposed to tell us that the vowel that comes immediately before it has a long sound: hate, delete, cite, cone. We have lone, pone, and hone, but where did gone come from? Prelate and prejudice are among the words that break the rule.

Consider the strange case of sure. In this instance a letter is missing, the h after the s. And there’s that final e. The u is not the sound of the u in dune or perfume; it’s more like an e, but not a long e, or a short e, just something like an e, but certainly not a long u. And, speaking of u, why does u have to come after q. It makes sense in quagmire but not in mystique (from the French, so of course it has silent letters!).

Melvil Dewey was a fanatic about reformed spelling—notice the spelling of his first name. This is the same Melvil who invented the Dewey Decimal System, which is used to arrange libraries around the world. When not sorting out books, Dewey championed the elimination of extraneous letters from English words. But it never caught on. He was just regarded as a crackpot.

The problem of all our silent letters stems from the fact that English is a mongrel language. Anu Garg, the guru of the A.Word.A.Day website, recently explained it this way:

If the English language were a cake, its batter would have Germanic flour. Sugar, butter, and milk would be of Norse, French, and Latin origins, not necessarily in that order. And on top of that would be icing with little flourishes here and there made up of dozens of languages—Arabic, Chinese, Spanish, Hindi, and others—it has borrowed from.

I feel compelled to add that our condiment ketchup is a poor relation of the Indonesian spicy sauce kecap, in which the c has the ch not the k sound. I cood go on, but you wood probably be thoroly bord. And, remember, we English speakers have it easy compared to the Danes. I heard their language is impossible to learn from a book! 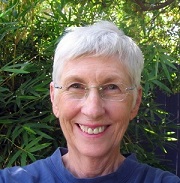 Jane Merryman specializes in copy editing: correcting grammar, spelling, punctuation, usage, and, as we say in the profession, infelicities.

If you live in the area, join us on May 21, 2015 at Writers Forum in Petaluma, California. Jane will be a panelist on an Editors’ Forum.