We have previously talked about the five senses: sight, hearing, smell, touch and taste.

The sixth sense can be described as telepathy, intuition, perception, imagination. . . those traits that use the mind to create and understand. Some people believe the sixth sense is the ability to problem solve; using our minds to read and interpret signals, to pick up or sense energy.

NBA Hall of Famer Kareem Abdul-Jabbar started reading Sir Arthur Conan Doyle’s Sherlock Holmes series during his 1969 rookie road trips. He was “fascinated by Holmes’ remarkable ability to see a world teeming with subtle but revealing clues where others saw only the mundane.” September 27, 2015 Parade

Kareem realized that Holmes used his power of observation to pick up clues missed by others. Kareem did the same with basketball. He observed players’ moves and habits and used that information to better his game.

Both Sir Arthur Conan Doyle’s Holmes’ character and Kareem Abdul-Jabbar problem solved by picking up signals, interpreting them, and with intuition, solved the mystery, won the game.

So how can you incorporate the sixth sense in your writing? Use your imagination and skills to create a world and characters who use their sixth sense. Remember the movie, The Sixth Sense? If you haven’t seen it, I highly suggest watching it as a tool for developing characters.

Use Holmes and his sixth sense as an example for fleshing out your fictional characters or to inspire writing about real people.

Authors and books whose characters use powers of deduction to solve mysteries :

More ways you can use the sixth sense in your writing. Your characters can embody these traits. From Yahoo Answers:

Clairaudience
The ability to hear beyond the normal range of hearing like messages in thought forms from an spirit who exists in another realm. Many of us become aware of this skill when we are in danger and that ‘little inner voice’ sends a warning.

Clairsentience
Clairsentience is the ability to feel things that something’s there but it isn’t seen. A lot of people have this ability but do not know that they possess it A tickling sensation on the hand or face during meditation. A pressure on the top of the head when talking or connecting with a Spirit. Hairs on the back of the neck standing on end when a spirit is near. A floral smell… A movement as a flick of white, purple, or blue light. Seeing shadows in the periphery of your field of vision

Empathy
Empathy is the ability to feel emotional, mental, physical and spiritual energy level and can be read as images or feelings, an empathetic person can find they are able to sense things with a person that others cannot sense. 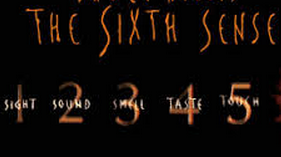 Click here for more Yahoo Answers about the sixth sense.