I think we all have an intuitive sense, but we get side-tracked by what others think or we get distracted by all the “noise” both inside our heads and outside. It’s hard to get quiet and listen to what we think. But when we do, we experience the joy of discovering what’s going on for ourselves.

A passage in Reading Water, Lessons From The River, by Rebecca Lawton, describes a situation when Becca was a white water rafting guide and had one person, a friend, in her raft. They capsized, lost the boat and nearly drowned. Becca managed to save the life of her friend.

After it was all over, Becca asked her friend: “Do you regret running it?”

Becca’s friend answered, “It might have been the right choice for you,” she said, “But from now on, I’m making my own decisions.”

Here’s an idea for getting in touch with your intuition and writing deeply.

You can use suggestions for relaxation from the June 24, 2014 Just Write Post, “Listen to your body as a way to creativity.”

Settle comfortably in your chair. Breathe in deeply through your nose. Exhale loudly. Take a few deep breaths and let go. Release your worries. Let go of your fears. Just let go.

Follow your inner sense, your intuition, your gut level feeling  …  pay attention, use what you’ve got. Don’t fight it. Relax into your own judgment and decision making. 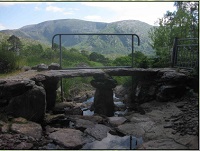