— Christina Baker Kline, interviewed by Alicia Anstead in the October 2014 issue of The Writer Magazine.

At some point in your writing life, you may think your writing is no-good, awful, horrible and no one would want to read it.

Join the Ark. Most writers, I think, are in that boat at least once.

Take the advice of Christina Baker Kline, author of Orphan Train, “Breathe, focus, keep your head down and keep going.”

Click here if you want prompts to jumpstart your writing. Click on “Comments” on any of the Write Spot Blog posts to read inspirational writing. 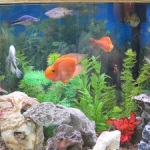