Today’s writing prompt is inspired by Rebecca Lawton’s May 26, 2014 blog post, which begins:

“Candles of buckeye blossoms and their subtle fragrance have always confirmed the return of summer. Seeing them this week reminded me that certain sights, sounds, and smells trigger strong memories. The whisking sound of a broom on stairs recalls family vacations at the lake, where our host rose early to sweep fallen live oak leaves. The musky scent of open water reminds me of being on a raft enjoying the primal sensations of floating a muddy river. The first bars of a Beatles song bring back the excitement of junior high school dances. Sipping tequila reminds me of kayaking from Loreto to La Paz on the Sea of Cortez.”

Writing Prompt: Stroll down memory lane . . . pause when a remembered event causes a visceral reaction: you might feel a sensation in your gut . . . write about that event, using sensory detail.

You can use the Summer Prompt as a starting place. Not the “how I spent my summer vacation” September school essay. Focus on detail . . . using sensory description in your writing. Capture that musky lake smell, the charred wood campfire smell. Go with tactile detail: the sticky marshmallows on your fingers, the feel of a rough floor on your bare feet, the bright sun fighting closed eyelids. Wake up! Go deep in your writing. Reach out and capture those feelings. . . whatever they are. 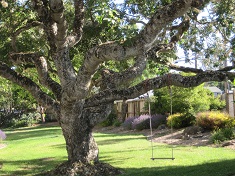 After you write, take a look at the responses to Prompt #77    (scroll down) . . . folks used wonderful detail writing about summer.

Join us! Write your freewrite. Post your writing on The Write Spot Blog.